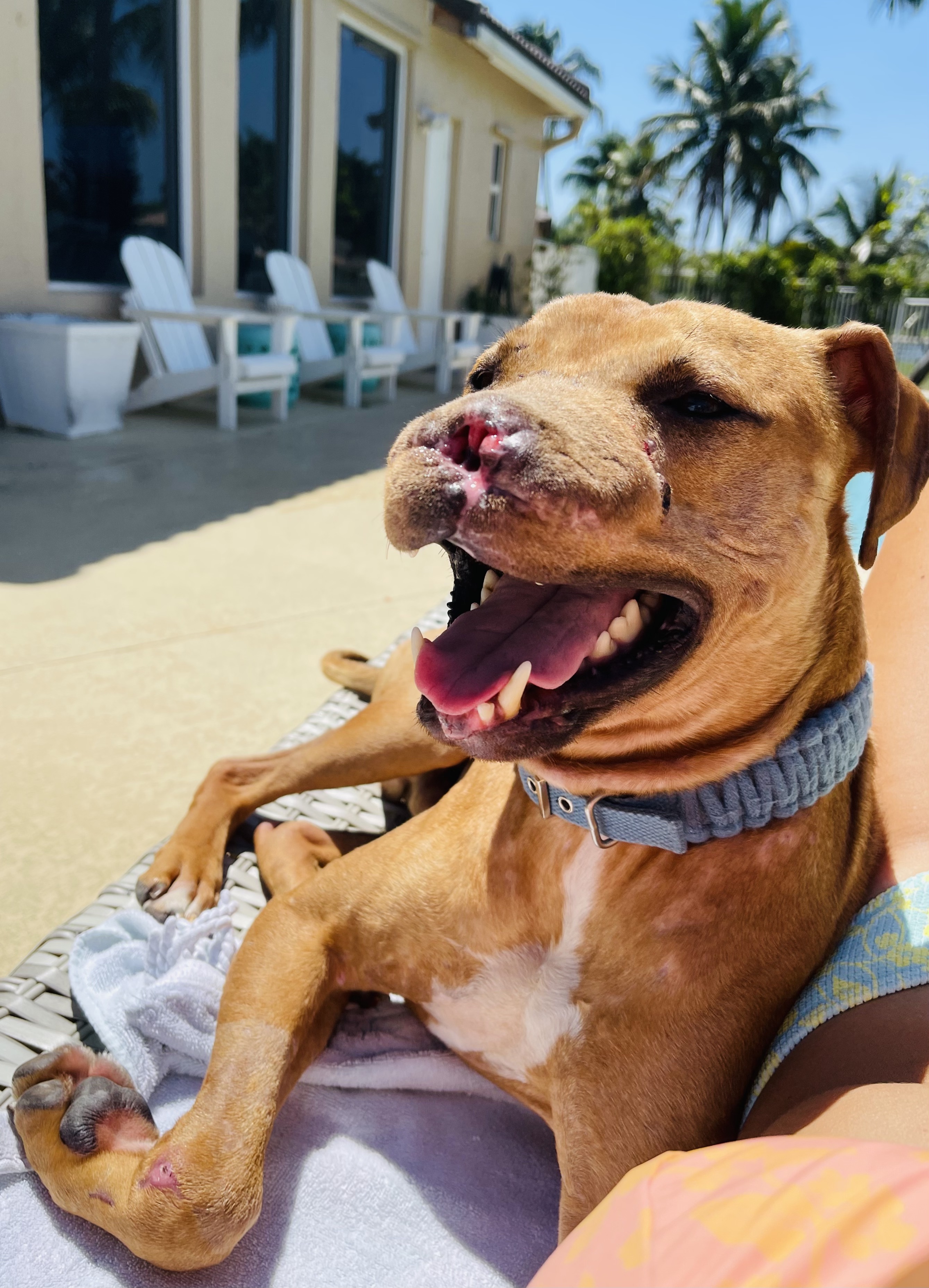 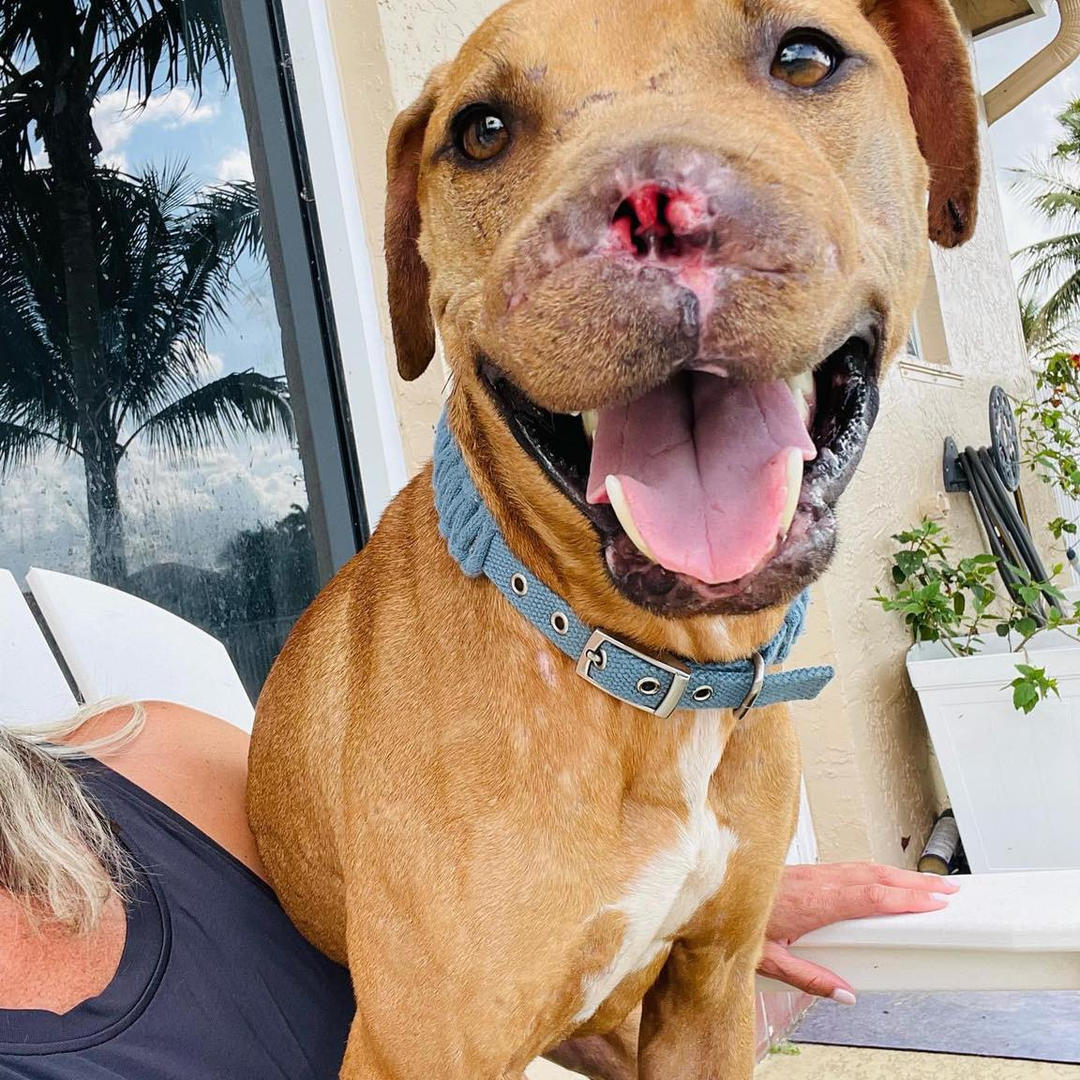 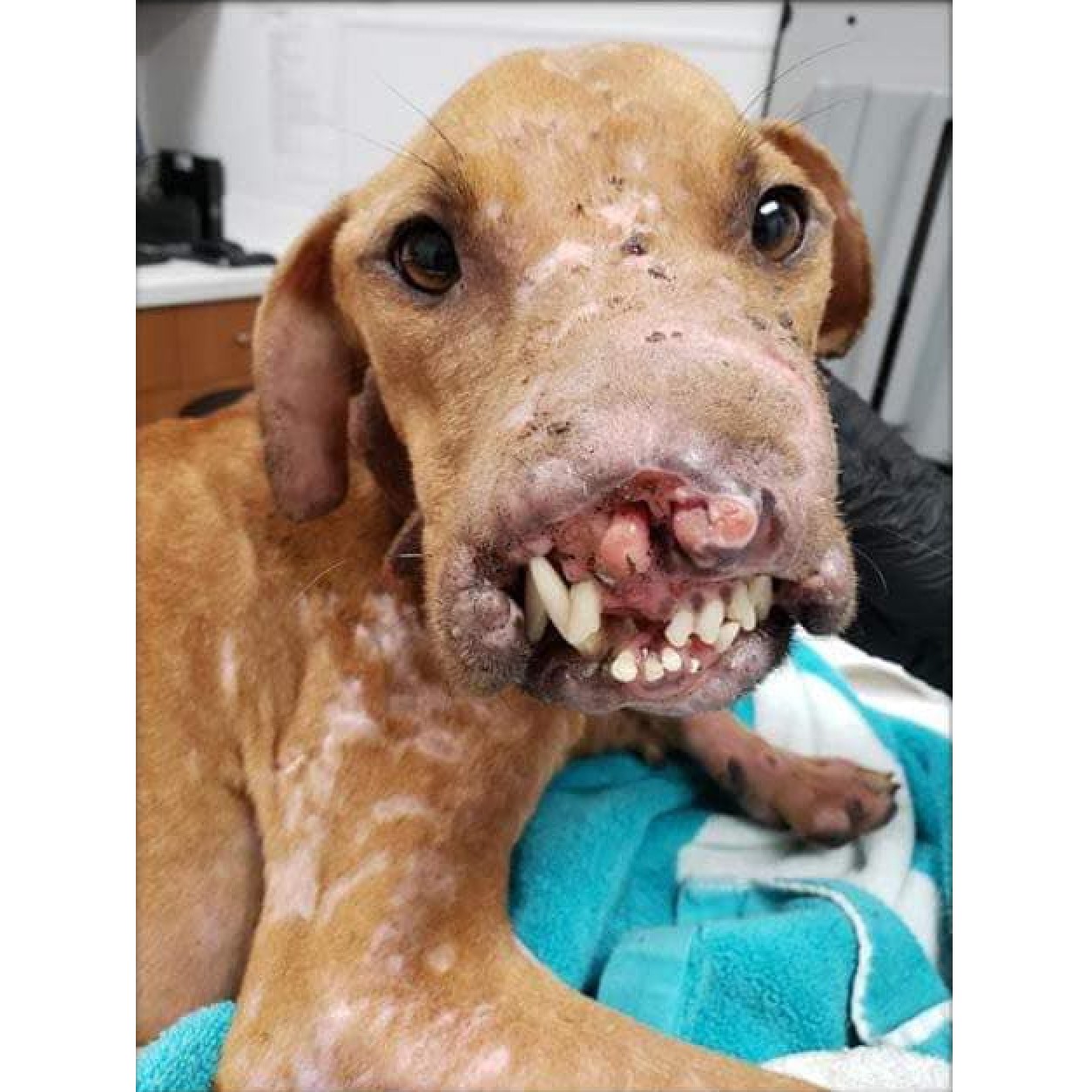 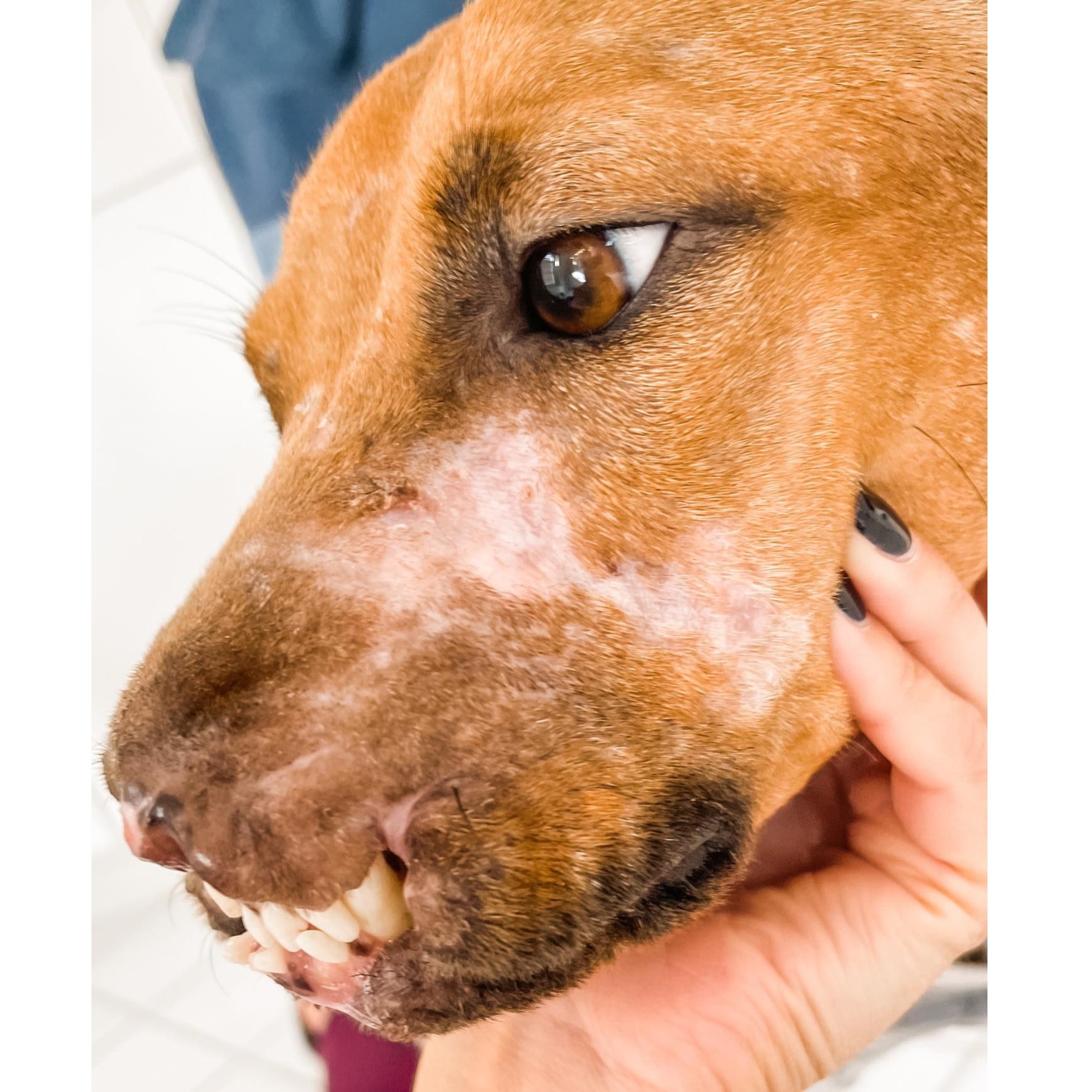 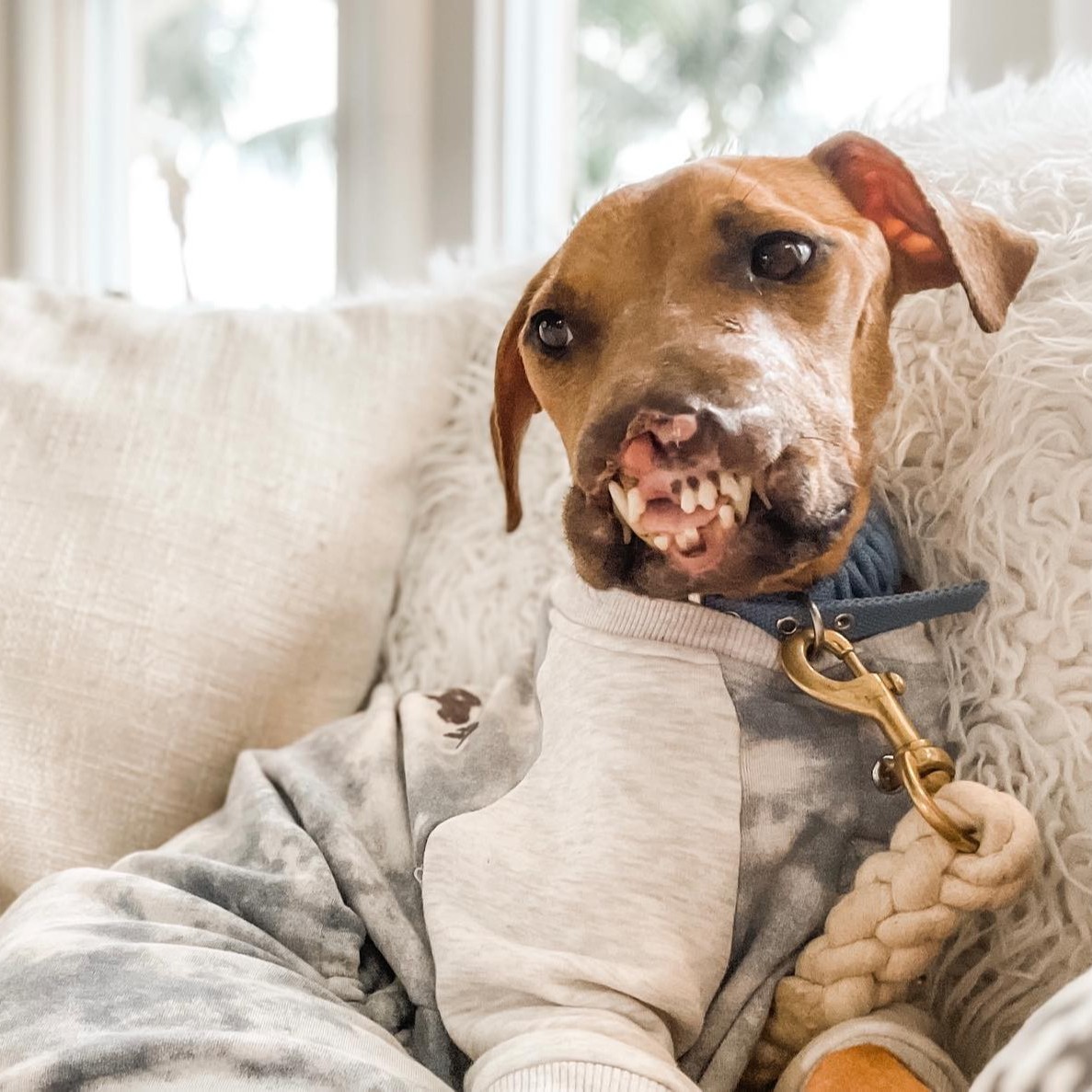 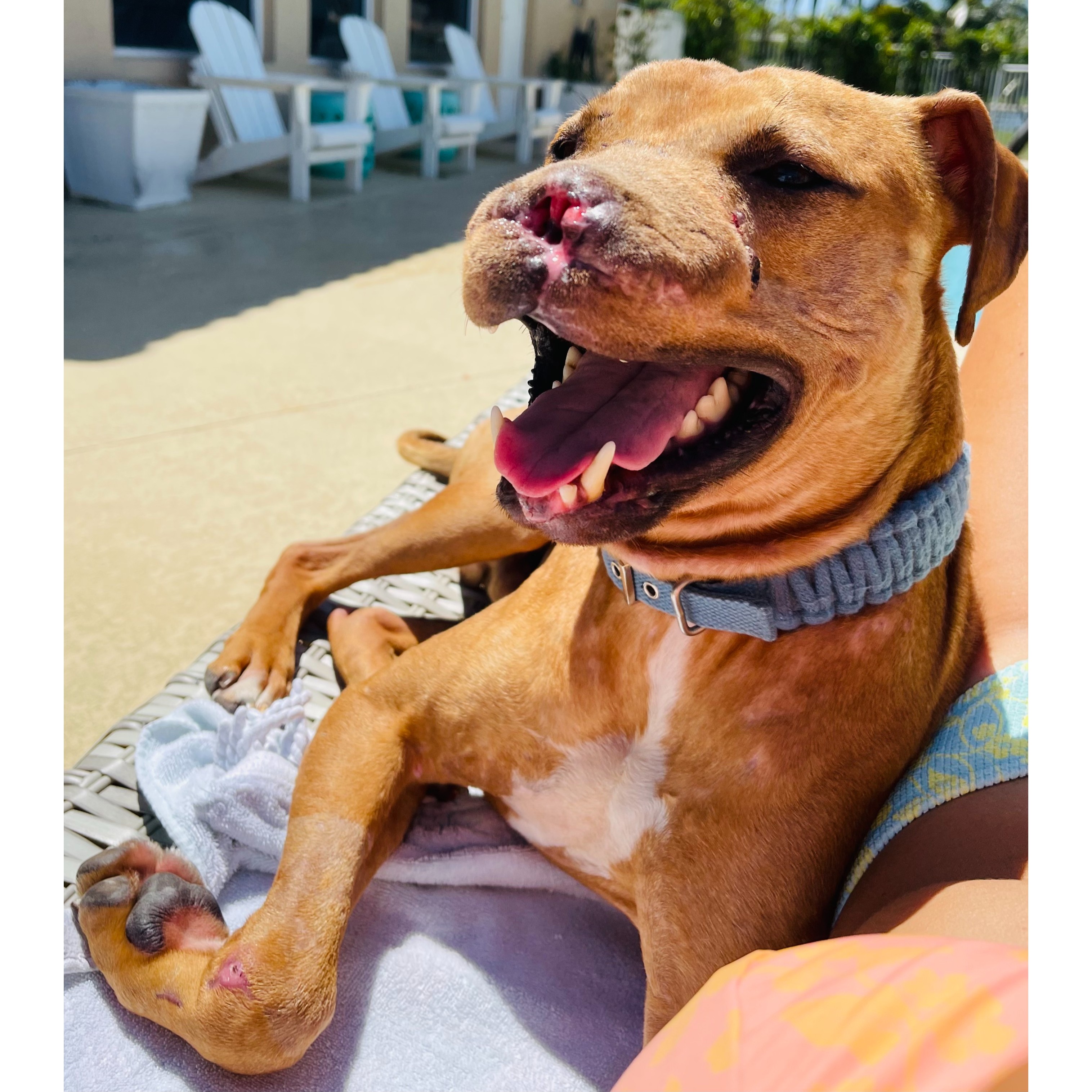 "At barely a year old, this incredibly abused soul has endured too much pain in his short life. The pure torture he has endured is unimaginable and his gut-wrenching condition gives us only a GLIMPSE of his monstrous life as a bait dog. The horrors, the repeated and unimaginable torture Baxter has lived through is what nightmares are made of; and how he is still breathing AND wagging his tail as humans touch him is a miracle.

While Baxter is CLEARLY a warrior, every single living species has its breaking point and we will forever be haunted in wondering when this precious boy reached his. Despite having the SWEETEST deposition, was it when he refused to fight and only wanted to be loved and to love the people around him? Was it when his teeth were ripped out one by one? Was it when his nose got mauled off? Or was it when he got to the point that he couldn’t even simply stand?"...

It’s hard to even know where to start with Baxter, his story, his recovery, and where we find him now.

The first time we held him in our arms, we broke. How could such an innocent pup experience evil of the worst kind? These disgusting people tried to steal his face, his body, his health- but they could not steal his spirit.

What a road we have been on with this incredible soul. He was extremely touch and go for the first week that we had him, the infections were so severe that they were quite literally trying to take his life. But he is a fighter, and he pushed through and began prepping for his reconstructive surgery- which went INCREDIBLY.

The sweet boy you see above is ONLY here today due to his persistence and your generosity. We were able to raise over $10,000 for Baxter’s care and surgery. Yes, you’re incredible generosity landed us with $10,000 of donations that we could use towards giving back what his horrible “owners” tried to steal.

We are over-the-moon excited to say that Baxter has been adopted!!! This story couldn’t have ended any better, but though his story is ending with us- HIS story is only beginning.

We thank you so much for your selfless giving, thoughts, and prayers for Baxter- it all paid off! We also want to thank CUDDLY for coming alongside us in seeing the importance of getting his story out there to the masses. We can’t begin to thank you all enough!